Boards from the Roth Open Swiss

The last big event of these Nationals is the Roth Swiss teams. 131 teams are on the starting list on Friday, 66 teams will qualify for the Saturday and 36 for the final on Sunday. The first day is acceptable for us, finishing 39 and qualifying for the second day. On Saturday we lose the first match slightly against Patricia Cayne´s team. In the second match we have strong opponents again, Kit Woolsey, Bart Bramley, Steve Robinson and Peter Boyd. The first five boards we are doing well, leading with 12-2. After the sixth board we are not in the lead anymore. 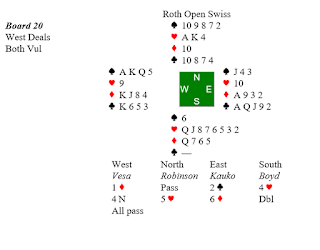 My six diamond bid was not a good choice. Not just because my clubs are so much better than diamonds. But if I bid six clubs and Boyd happens to have a diamond void and doubles, I can run to six diamonds. My bad choice was severely punished, when Boyd made the Lightner double, Robinson duly led a club and the defence got their two ruffs and the Ace of hearts, two down and -500. At the other table West opened one strong club and East was bidding one no-trump showing clubs. Sadik was pre-empting with three hearts, West splintered four hearts, Melih supporting with five hearts and East was ending the bidding with six clubs. Easy twelve tricks, 1370 and losing 19 IMPs. Somebody should have sacrificed against this slam, six hearts going only two down.


Later when discussing about the board with our opponents, Robinson told me that he would have sacrificed against six in a minor, if partner is not doubling.


If I would have bid six clubs, Boyd told me that he would double that contract as well! This psychic Lightner would have worked nicely as well. Being certain that South has a diamond void, I would run to six diamonds. South is doubling again and it shouldn´t be too difficult for Robinson to find the correct opening lead.


In the third match we have some easier opponents, but still we lose again. Despite the following nice three no-trump hand. 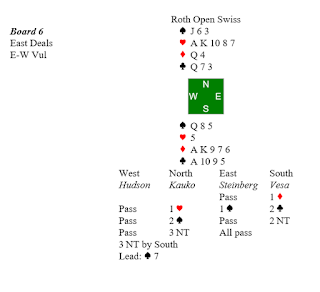 Hudson started with the seven of spades to the East´s nine and the Vesa´s Queen. What would be your line of the play?


If diamonds are 3-3, there´s no problem. But if they are 4-2, you have to establish the suit for the eights trick. But then there is no chance to try to establish for the ninth trick, because defenders will cash out four spades for one down. You should know that the defender´s spades are 5-2 and not 6-1, because East didn´t open the bidding with a weak two in spades. From the bidding you should know that west might have the most stopper’s in the remaining suits. The key play is to try to cut the defender’s communications. By playing another spade West might feel the pressure to keep stoppers in the remaining suits when East is cashing his spade winners. It is no good for East not to cash his spades as he has no entry to his long suit after the second round of spades. In the actual board West could not find a discard for the fifth spade. East squeezes his partner in three suits. The whole board was: 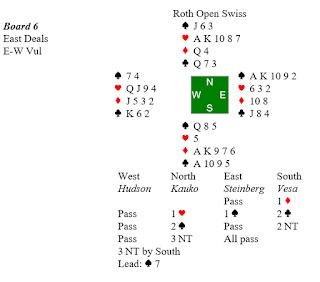 Actually, in the ending declarer needs to guess if West started with CKxx or CJxx if West discards one heart and two clubs for the spades. In the actual play West did not discard two clubs so the play was easier.


At the other table 3NT went -1 after a heart lead and a nice 10 imp win. Unfortunately, the rest of the Saturday games did not go that well. We did not qualifie to the final day so we need to play one session Swiss event on Sunday. The results can be found:
http://live.acbl.org/event/NABC182/OSWS/4/qualifiers