Disasters do happen at the top level!

The game of bridge could be also called as a game of mistakes. Everybody will make a lots of mistakes - that's something that cannot be avoided. The best make less erros but still time to time they may end up in a silly contracts. The following hand is an example.

After partner opening and right hand opponent's 1NT-overcall I was happy to start doubling them. Eventually I was almost on cloud nine when they ended up on playing my best suit, doubled.

The defence was merciless. Furthermore, the declarer was so unhappy about the contract that failed to cash one of his obvious tricks. You can follow the play in the bridge movie below.

1400 was a nice score to collect! Something to be learned?

Even the experienced players end up in silly contracts - it is human. Even when playing a dumb contract, you should focus on the board, and after it is over try to forget it as soon as possible. It is only one board - it should not ruin your entire session. 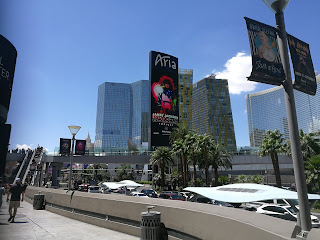 The hotels are connected to each other in Las Vegas via pedestrians sky-bridges, as in picture above