The two-day knock-out teams starting on Monday has always quite an easy field. All the ambitious teams are starting the main event, in the Summer Nationals the Spingold, so we go easily thru the two matches of the first day. In the semi-final on Tuesday it was not so easy anymore. We start well, however, scoring 10 IMPs in the very first board. 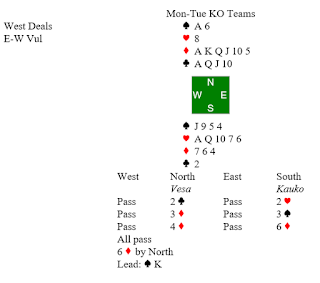 My two heart bid showed a five card suit including at least three of the five highest cards. I was planning to bid four diamonds, if Vesa would bid three no-trumps, showing nicely my distribution. But after four diamonds I couldn´t find a scientific approach anymore.


Radu Nistor, a Romanian born pro from NYC, started with the King of spades. Vesa took the trick with the Ace and played back another spade, two, Jack and a ruff with D8. Vesa took the diamond 9 continuation with the Ace, followed by club Ace and a club ruff. Spade ruff to hand, club ruff with dummy´s last trump and another spade ruff. When Vesa was running all his trumps, West was keeping her King of clubs and had to discard three hearts, leaving only a singleton heart in her hand. The moment of truth was now reached.


Vesa made the right decision not to play for a squeeze, but simply took the heart finesse for twelve tricks. Why? Because West was the client of the team, an average standard player, who would be showing her suffering, when the last trump was played. Against a top class defender the choice would be much more difficult, specially if the last discard would be the Jack of hearts. The whole board: 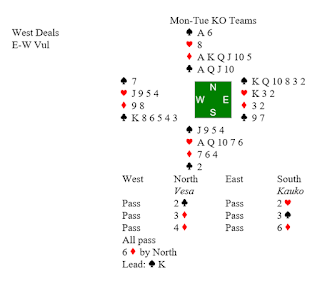 The rest of the match is not going our way, losing the match with 45-63. Melih decides not to play the one session Swiss teams in the afternoon, so we are enjoying our free evening with some movies at our apartment.


On Wednesday we started another two-day knock-out team tournament. The first match is an easy win against surprisingly weak local team. But seeding for the next round can´t be worse for us, we have to play against French open team captained by Paul Street. The first half is bad, and we are down 14-41 at the halfway. In the first boards of the second half the gap is closing with some IMPs, but after the next board is was all over. All red, Vesa opens 14+-17 no trump, RHO doubles showing points and I have 7, QJ75, AKJ86, 964. I redouble, showing strength, expecting opponents to run into a spade contract, and then wondering can I pass if partner doubles. Nobody is running anywhere, however, and at the same time I’m hopeful but very worried as well. The opening lead is the King of spades. 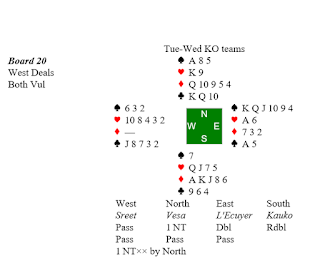 East makes his five spade tricks plus two Aces, one down and -400. Not a great result, five diamonds being a laydown contract. At the other table Melih and Sadik are ending up in four spades doubled. Cedric Lorenzini makes no mistake of “looking at the table” with the Ace of diamonds. After that opening lead we would have won the board with nine IMPs! Instead he leads a trump and after the second round of trumps the contract goes two down, -500 and 14 IMPs to the French team.


Later we had some discussion about my redouble. Much safer action would be to show a strong distributional hand with two no-trumps. But on the other hand, Vesa might have a good four card or any five card spade suit, and then we could kill the opponents in any contract. And only five boards left, knowing that you are about 20 IMPs down, some desperate actions are in order! The results: http://live.acbl.org/event/NABC182/302A/2/summary