Some boards from the Sunday swiss

On Sunday we played a one-day Swiss team tournament. An easy start against Canadian Juniors (20/0) was followed by not so easy continuation against the French open team, captained by Paul Street (7/13). Third match we are winning slightly and in the fourth round we are playing against our Icelandic friend Svenni Eiriksson. 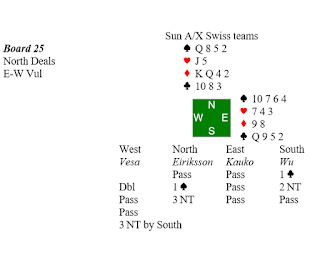 Vesa starts with the three of diamonds (3/5), dummy plays low and declarer is winning my eight with the ten. Next declarer cashes the Ace of clubs, Jack, eight and two. Then he continues with a small club to the ten, partner discarding an encouraging five of diamonds. Take it over from here.


It seems quite natural to take the trick with the Queen and continue thru dummy´s weakness with a heart. The only question being, should I show three cards with a switch to the three or should I play the seven, attitude, denying strength in the suit?


But before continuing with any heart, let´s try make some picture of the whole hand. Declarer´s jump to 2NT showed a 18-19 balanced hand. The opening lead tells that partner has the five of diamonds. Vesa must have four hearts as well. With 5-5 in reds he wouldn´t double and if Vesa has three diamonds, declarer would have five and he would have opened one heart. So, partner has 3-4-5-1 and declarer 2-4-2-5. Can partner´s hearts be good enough, that my heart switch could beat the contract?


Not really, only if Vesa has KQ109, we could establish the needed tricks from the heart suit. Is there any other chance?


Yes, if declarer´s spade doubleton is precisely K9. So be it! The whole hand: 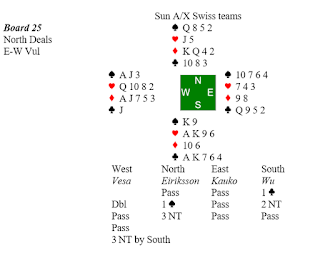 I played a low spade and Vesa was winning the King with the Ace. Vesa continued with the Jack to dummy´s Queen and I was so happy to see declarer following with the nine! Later, after cashing the Ace of diamonds, Vesa was able to play a spade and the contract was one down. Declarer didn´t do his best in this board. If he ducks the second round of spades, the contract is unbeatable.


At the other table Melih was playing the same contract from North´s hand. The lead was a low spade to the King and the Ace. Melih ducked the continuation of the Jack of spades and took the third round with the Queen. The ten of clubs ran to West´s Jack and Melih won the continuation of a low diamond. The eight of clubs was covered with the nine and the Ace. West won the diamond continuation with the Ace, but now he was endplayed and had to give an entry to declarer´s hand for the club finesse. Nine tricks, 10 IMPs, the whole match being 19/1 for us, so we went for the lunch break in a good position.


The afternoon session started too badly. Losing two matches against not high-level opponents and we could say goodbye for any end position to be proud of. The 20/0 victory from the last match was a slight comfort.


In this last match I had a very good hand: AQ542, KQJ754, A, K. First hand, all red, I open one heart and partner is bidding three diamonds, which shows 10-12 and four card support. My RHO doubles showing diamonds. What next?


Then partner might bid three spades with the King. So, redouble it is and Vesa starts to think.


At the same time I start to fear for the worst. In some sequences, if opponents are doubling our conventional bid, like Stayman or transfer, redouble shows that suit and willingness to play this contract. What if Vesa thinks I have a good five card diamond suit and passes?


That would the disaster of the decade! To go down about three in diamond partscore, -1600, instead of collecting 2210 from a grand slam in hearts. To my big relief Vesa bids anyway, jumping to four hearts, which I take as minimum. I check the keycards with four no-trumps, Vesa promising two without the trump Queen, and then I invite to grand with five no-trumps. When Vesa is slowing down with six hearts, I decide to settle for a small slam and pass. 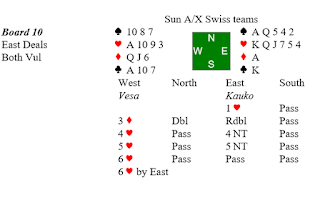 South started with a low diamond. How would you proceed?


If North has the King of diamonds, as expected, the contract is almost 100% sure. I won the diamond lead, crossed to the dummy with a heart, both opponents following, and played Queen of diamonds. North covered (didn´t make any difference), I ruffed, unblocked the King of clubs, played a heart to the ten and cashed the Jack of diamonds and the Ace of clubs. A club ruff was followed with the third round of trumps ending dummy. In the four-card ending dummy had 1087 of spades and one heart and I had AQ5 of spades and one trump. North didn´t cover the seven of spades, I played the five and South was endplayed. If North would cover the seven with the Jack or the nine, I just play the Queen and the contract is assured. The whole hand: 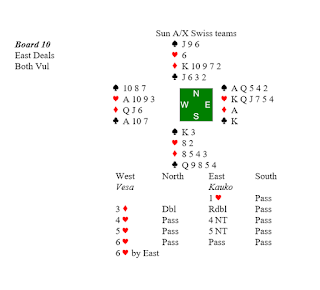 At the other table our opponents bid all the way to the grand slam. That contract needs KJ doubleton onside. Lucky us, no miracles and we won 17 IMPs. The results: