What a big disaster!


In the 21st round we meet Spain and the match is still quite flat after 11 boards, the Spaniards leading with 25 to 23. In the closed room we are playing against father and son, Federico and Gonzalo Goded. After the 12th board the match is not flat anymore. I hold A J 5 3 2, A Q 9 5 3 2, J, Q. We are red, the opponents green and my RHO passes as declarer. My first question is, which major I should open with. Our system allows us to reverse with 6-5 with good looking 13 hcp. I´ve got 14, not so good looking, but still I decide to open with one heart. The father is overcalling two clubs, Vesa passes and the son is raising pre-emptively to four clubs. Nasty opponent’s! Would you bid something in this situation?

Pass is out of the question. If partner has anything useful in majors, we´ll easily make four in a major. But if I bid four hearts, partner passes and we might go down when four spades could be cold. Four spades would show my distribution nicely, but the four hearts could be the contract we should end up. The double looks like the best move. It is for take-out and in principle I show some diamonds as well. But if partner bids four diamonds, I could continue with four hearts promising both majors. So I double, but when the tray comes back, I´m almost having a heart attack! Partner has bid five diamonds, doubled by my RHO. What next? 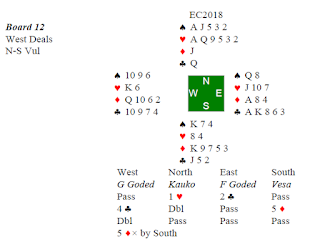 We go down three doubled, -800 and minus 16 IMPs, when the Spaniards are making four spades at the other table. It is not easy to say whose more to blame for this disaster. This time Vesa should have bid only four diamonds and we would have ended up playing four in a major. But if he bids four diamonds, that would end up the bidding if I had a proper distribution (4-5-4-0) without extras and we might be cold for six diamonds!

Anyway, our bidding was certainly not professional, but our attitude was. After the board not a word was exchanged, the result was scored and next board set at the tray as usual. And even after the match, instead of accusations, more attempt was made to analyse the situation, how to avoid these kind of disasters in upcoming events.