In the second round match against defending champions France I hold a good hand:
A Q 10 9 4, A J 4, A 10 6, A K. After three passes I open two clubs, artificial strong, and my partner responses two diamonds, waiting. Now I have two options, either two spades or two no-trumps. I prefer to bid two no-trumps, showing 22-24 hcp balanced, because my partner can ask five card majors if he wants to. Vesa bids next four no-trumps, natural and inviting. I have minimum points for my bid, but with the fifth spade and two tens I have to go on. So, I bid six spades, proposing the final contract, and this is passed round. Jerome Rombaut leads the seven of spades. 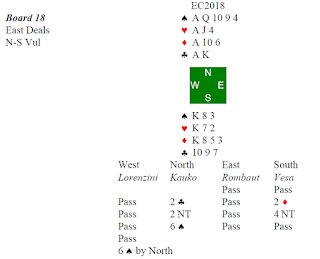 After the spade lead I don´t have to worry about potential trump loser, but I have one loser in each of the red suits. The straightforward line would be drawing out the trumps and testing the diamonds. If they are not 3-3, I could take the heart finesse. So, I take three rounds of trumps, ending dummy. I play a small diamond to my ten, Rombaut wins with the Jack and continues with the queen. I play the third round and when both opponents are following, I can claim my contract. 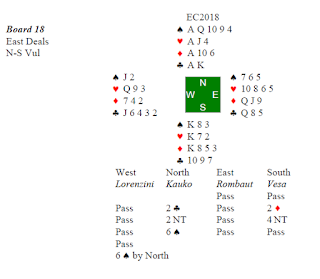 If East had four diamonds (in which case he would play back a club instead of a diamond), I could simply trust on a heart finesse, or I could play for a squeeze. If East had four diamonds and the Queen of hearts, all I have to do is to finish my black suits. But if West would be alone to guard the clubs, I didn´t have to care who has the Queen of hearts. In the four card ending I have the last spade and A J 4 of hearts. Dummy´s last cards are K 7 of hearts, one diamond and one club. When I play the last trump, East has to discard a heart, dummy a diamond, and then it´s West´s turn to be squeezed.

Without any squeezes we score 1430 and I´m expecting either push or 13 IMP win, depending if our opponents reach the slam at the other table. But it turns out to be that we win 2 IMPs on the board. Lionel Sebbane and Paul Seguineau had a misunderstanding in the bidding and the final contract was six diamonds. In this slam you don´t have to think about any squeeze or finesse possibilities. Either the opponent´s diamonds are 3-3 or you go down! Those lucky bastards…

Against Ireland in round number 26:

My red suit combinations were suggesting, that partner should be declaring, if our final contract is no-trumps. However, if I would open one spade, it might not be easy to describe my hand in continuation.  John Carroll´s two hearts was natural and his opening lead the six of clubs was fourth best. Tommy Garvey is following with the Queen. Take it over from here.

After the club lead I see seven top tricks and I can easily establish the two missing tricks from the spade suit. Only if East has something like Q10xx in spades, I could establish only one extra trick from this suit. But the lead is strongly suggesting, that East has a two suited hand with hearts and clubs, so if someone is long in spades, that´s Garvey. But if I attack the spade suit first, I might lose trick to the Queen of spades and defence might continue with four rounds of clubs for one down. Any ideas?

I decided to continue with clubs to the second trick. Of course, I would have something to explain to my teammates, if East made his opening lead from a six-card suit! Luckily West is following to second round of clubs and I´m not down yet. The idea of playing clubs is to see how the suit is divided between the opponents. If they are 4-3, I can´t fail to make my contract. If they are 5-2, Carroll might not take all his club tricks being afraid to rectify a squeeze against his partner. The clubs are 5-2, Carroll take two more rounds, then takes a long pause but finally plays the fifth round as well. Garvey discards three diamonds and I give up one diamond from the dummy. From my hand I discard one spade, one heart and one diamond. East plays next the six of diamonds. Where are we now?

West´s three diamond discards are telling, that he had originally six cards in that suit. I´ve lost already four tricks, so I can´t afford to make a wrong view in the spade suit. I take a second round of rounds and East´s six was singleton, as expected. If East had 2-5-1-5, I just have to make right guess in spades. But if he had 1-6-1-5, the contract is assured. My next move is to take two rounds of hearts to confirm the exact distribution. If East has 1-6-1-5, West is squeezed on the second round of hearts. He has to keep his master diamond and therefore he has to discard one spade. Then I can continue with the King of spades and take the marked finesse against West. But unfortunately, West is following to the two rounds of hearts, so I know that East had 2-5-1-5 and now I have to make the right guess in spades. Would you play for the finesse or the drop?

I continued with the spade King and small to the Jack, being quite confident that the finesse will be right. Remember the discards of Garvey. If he had 10xx, xx, QJ10xxx, Qx, he wouldn´t discard three diamonds, because declarer might have AJxx, Axx, Axxx, Kx. The whole hand: 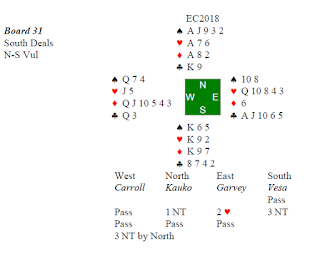 Unfortunately, the lead against the same contract is the Jack of clubs at the other table and declarer´s worries were over.