Not a good start…

The match against Sweden in round number four is something I’d like forget soonest possible. Two first boards are boring no trump games, but the third board is interesting. 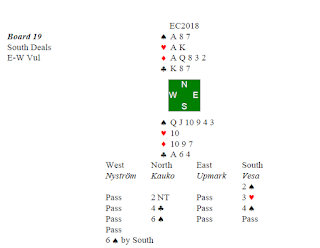 Two spades was weak, three hearts promised bad suit and good points, four hearts showed one key card with spade Queen and that was enough for me to place the final contract with six spades. Nyström led the Queen of hearts to dummy’s Ace, Vesa crossed to his hand with the Ace of clubs and run the Queen of spades, Nyström discarding a heart and Upmark ducking when dummy played low. What next?

With the King of trumps offside, the diamond finesse must succeed. Vesa played a diamond to the Queen, discarded a diamond on the King of hearts and tried the Ace of hearts. Unfortunately Upmark ruffed that trick and could later take the setting trick with the King of spades. The whole deal: 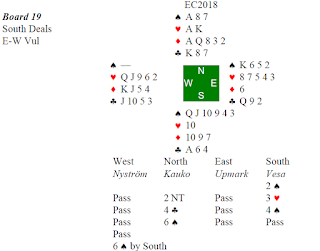 This time Vesa could have survived the bad trump break with a double finesse in diamonds. At the other table the Swedes satisfied themselves with four spades, so we lost 11 IMPs.

Not easy. The textbook bid would be one no trump, but with singleton spade that didn’t look too tempting to me. If we should end up playing a no trump contract, I shouldn’t be the declarer.  If I raise, I should have a five card support, because the opening might be only three cards, although quite seldom. For two clubs I wish to have one or two points more, or longer/better club suit. Maybe one heart? It looks like a four card suit, anyway! Finally I decide to make a weak raise to three diamonds and I notice that my screenmate Fredrik Nyström makes a takeout double. The tray comes back in two seconds with two passes. I´m getting worried, but there’s no way to go anymore. 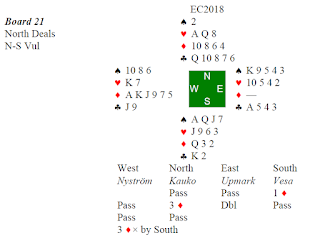 What an easy pass for Johan Upmark! He started with three rounds of diamonds, but luckily for us, the major Kings were well placed for our side, so we escaped for “only” two down, -500. At the other table the bidding was much shorter. Pekka opened with two diamonds, Ekren, showing both majors, and that was closing the bidding. That was down three, -150 and 12 IMPs for the Swedes. 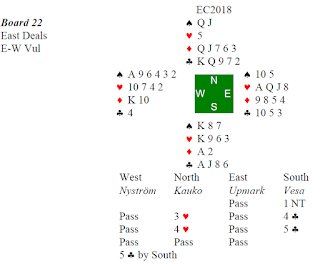 Our opponents start with the Aces in the majors and eventually Vesa has to lose one trick in diamond as well. One down and 10 more IMPs to the Swedes, who made nine easy tricks in three no trumps at the other table. Why do we have these stupid fancy conventions!? At our club my little old ladies raise one no trump to three and most of the time they even make nine tricks with these cards! But on the other hand, hearts might be 5-3 and the King of diamonds onside, in which case five clubs makes while no trump game goes down.

So, after these three boards we are down by 30 IMPs. Couple of boards later I have 7 4 3, A 10 8 2, K, Q J 10 7 5 and I hear Nyström open three spades from my right. I pass and Upmark bids four clubs, asking partner, do you really have your bid? Four spades is telling no and Upmark jumps to six spades. What is your lead?

At my lessons I give the opening leader a nice sequence, telling that if God has given you QJ10 or KQJ, he demands you to lead the top of this sequence. But in this position I thought it might be a good idea not to listen to God. Dummy must be very strong and I know that diamond King is well placed for declarer. Maybe the only chance to beat the slam is to find partner with the Queen of hearts and hoping that declarer guesses wrong when I start with a low heart. 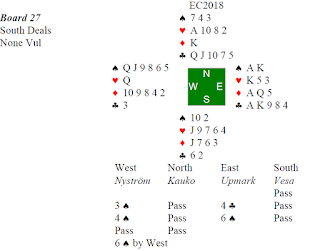 I was very happy seeing the dummy! Only if Vesa had the Queen of hearts and declarer the Jack. My happiness was over in three seconds when Nyström won the first trick with the Queen. Later he couldn´t make a wrong guess in diamonds and the diamond Jack was our only trick against this slam. And again, all the little old ladies at my club would cash the Ace of hearts in the first trick, and declarer couldn´t avoid losing one diamond trick at the end. Luckily for us, Simon Hult for Sweden decides to make same clever lead, so no swing in this board.

In the eighth round we meet the Danes. Lars Blakset is playing against with the young star Dennis Bilde. With Lars we played in same Europeans already in Wiesbaden 1983, ten years before our partners had even born! I asked if he remember how our match finished those days, but he doesn`t. I´m telling him that I never forget that result, it was crushing 20/-2 for us! This time we have a good start as well. In six first boards we are making all our contracts and our opponents are going down in theirs. But then it´s our time to go down. Third in hand I open in red one club with A 8 3, 10 9 5, A 10 3, A Q 8 3. In green Bilde makes a weak jump to two hearts and Vesa makes a negative double. Lars passes and it´s my turn. What would you choose in this awkward position?

Two choices come to my mind. Two spades or two no-trumps. Maybe with 109 in hearts I should choose the no-trump bid, but after a long thought I decided to bid two spades. That is passed out and Bilde leads the two of diamonds. 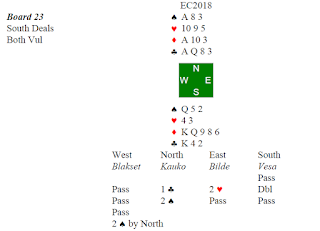 Why didn´t I bid two no-trumps?! In that contract opponents might take their six heart tricks, but I would then take the rest for one down. And if Bilde made his pre-emptive jump with a five card suit, I might even make my two no-trumps. But this spade contract looks like to go several down. Maybe Vesa should have bid three diamonds? As a passed hand I wouldn´t expect too much of him. Well, too late to think of bidding anymore. Now I have to escape with small injuries in this superMoysian fit. I win the diamond in my hand and play a small spade to the Queen and the King. Blakset takes the King of hearts, continues with a heart to the Jack, I ruff the Ace of hearts, but Blakset overruffs with the six. Bilde ruffs the diamond shift with the seven of trumps and plays hearts, I discard a club from dummy and Blakset ruffs with the ten. What next?

So I´ve been losing already five tricks, so now it´s time to start counting the number of undertricks. I could escape for one down only, if Blakset had KJ106 in spades. If I overruff and continue with spades, that would be the last trick for the defense. But on the other hand, if Bilde has Jack third in trumps, I would go three down. I decided to overruff and continuing diamonds. If opponent´s remaining trumps would be one-one, they would score them and the contract would be two down. The whole deal: 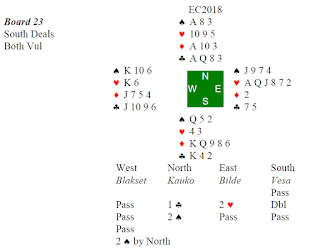 Bilde ruffs the diamond, removes my last trump and runs his hearts. Four down! The correct move would have been to refuse the overruff and going “only” three down. At the other table the Danes go down two in three no-trumps, so we lose 5 IMPs.

Then I have a good hand: A Q J 2, A 4, A Q 9 8 5 2, A. My RHO passes and I have to open, red vs green. The hand might be good enough for artificial game force of two clubs, but if partner is responding two diamonds, I have to bid three diamonds and we are already uncomfortably high. That´s why I prefer to open one diamond, hoping that I can express my values later, f.ex. with a jump reverse to two spades. These hopes disappear anyway, when Bilde is jumping to three clubs and Blakset is raising to five clubs. Now what? Anything could be right. Five diamonds, five spades or double. I double, just wishing that partner won´t bid five hearts, because then I would face the second problem. Everybody is passing anyway, not being a good result for us the whole hand being: 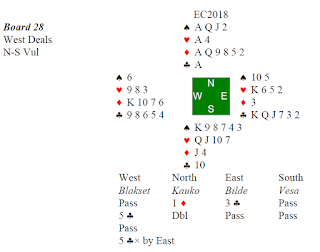 Five clubs went three down, +500, but no reason to be too proud of the result six spades being cold on our side. Luckily at the other table they have same problems, and fortunately for us, North decides to bid his diamonds at five level, and after misguessing the trumps, goes one down. So, that meant surprising 12 IMPs for the good guys.