The highlight of the past two days was a great dinner with Justine and Melih. The excellent 8oz Filet Mignon and nice Californian Chardonnay was like heaven after losing match after match. Against French open team captained of Paul Street was another highlight. 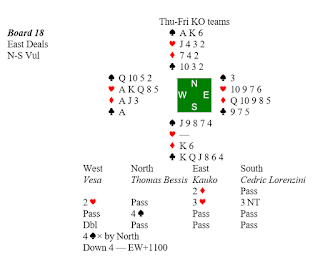 After the first half we were down by 11 IMPs, all the boards from the second half were boring ones, so some difference had to be created in the last board. That explains my not-so-disciplined weak two opening of two diamonds. When Vesa bid natural and forcing two hearts, I was thinking for a moment for a second undisciplined action of passing, but wisely enough I didn´t. Lorenzini bravely showed his black two-suiter with three no-trumps and Vesa decided to pass. If Bessis would pass as well, 3NT would be expensive enough. If he would bid four clubs, Vesa would bid with four hearts. And if Bessis would bid four spades, like he did now, Vesa would have the taste of blood in his mouth.


I lead a the ten of hearts and the dummy was ruffing. The Jack of spades was covered by the Queen and the Ace, and next declarer proceeded with a club to the King and the Ace. The Ace of hearts was ruffed in the dummy and declarer continued with a high club, which was ruffed by Vesa. That was followed another heart ruff and another club ruff. Vesa continued with his last trump removing at the same time dummy´s last trump as well. At this moment Bessis was thinking that he´s surviving for one down. If I have a normal weak two opening, something like x 109x AQxxxx xxx, the Ace of diamonds would be the last trick for the defence. Bessis continued with a diamond to the King and when Vesa won with the Ace, declarer´s six of trumps turned out to be his last trick! Down four and 1100. Declarer could have escaped for three down by end-playing Vesa with the Jack of hearts. Vesa could cash his last heart as well, but then he is forced to concede a trick to the King of diamonds.


At the other table our Sadik plays the same contract, but miraculously escapes for one down only. So we win 14 IMPs, but that is not just enough and we are knocked out from the semi-finals.
klo maaliskuuta 17, 2018