On Tuesday-Wednesday we played another KO team tournament again. Since the Vanderbilt has just started, we were of course seeded to the first bracket, but without fear that we had to face a world class team in the first round and to be knocked out immediately. Against average opponents we win all our matches on Tuesday, in the semi-final we lose the second half of the match against Brazilian ladies´ team with 20 IMPs, surviving still, the first half being 44-7 to us. The final is not starting too well for us and we are down by 14 at the halfway. The second half is better, 24-15 for us, but not good enough, so we have to be content with second place. Results: http://live.acbl.org/event/NABC181/133A/2/summary


Your opponents have bid three suits naturally and then end up in three no-trumps. You hold void in the unbid suit and your partner is on the lead. It´s not 99% sure, but 100%, that partner is finding your void with the lead, right? On the following board Vesa was positively surprised when I didn´t lead a diamond. 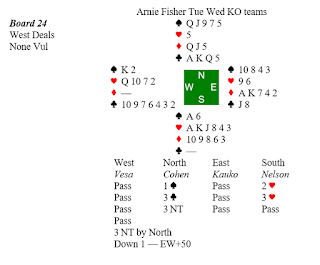 I lead the nine of hearts, dummy tried the Jack and Vesa won with the queen. Back came a club ten, declarer won the trick with the Ace and continued with the Queen of diamonds to my King. A heart looked very tempting switch right now, but luckily for us I took a second look of the situation. Declarer would win the heart switch and play a diamond to the Jack. After winning my diamond Ace (with or without ducking one round), there´s no more chance for the defence. Declarer can enter the dummy with the Ace of spades, take his diamond tricks and play spades towards his hand. Whatever partner has in spades, declarer makes always at least nine tricks. But if partner has the King of spades, a spade switch to the fourth trick might disturb declarer´s entries.
So I continue with a low spade and Vesa surprises positively by taking the King and continuing spades to dummy´s Ace. Next declarer cashes one high heart, discarding a small club from his hand, and continues with a diamond to his queen. I win the trick and continue more diamonds to the dummy. Vesa can lean back to his chair and wait for the setting trick with the ten of hearts.
Declarer´s line was not the best one. He shouldn´t have played a small diamond to his Queen in the end position. If instead he would play the ten of diamonds and a the five of his hand, deliberately blocking the suit, he would survive. If I would win with the Ace, declarer has eight tricks in his hand. With the heart Ace already in his bag he would make the contract. If I duck the diamond ten, declarer cashes next the King of hearts and endplays Vesa with a heart. He has to continue a black suit and declarer reaches his winners in his hand.


Against the ladies from Rio de Janeiro the following board was the biggest swing for us. 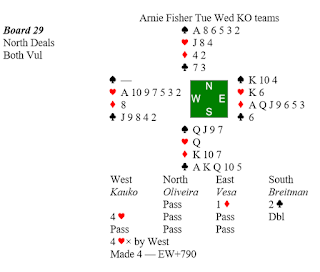 My four heart bid looks aggressive, but partner is short in clubs and has at most four spades, so odds are on that he´s not too short in hearts. To my mind North should take out the double with four spades, but in that case this board would have been forgotten quite quickly.


North started with a low club to South´s Queen and I ruffed the club continuation with dummy´s six of hearts. Diamond to the Ace was followed by Queen, King and ruff. I crossed to the dummy with a heart South following with the Queen. Now if South´s distribution is 4-1-2-6, I’ll make my contract. I discard one club on the ten of diamonds and another one on the following diamond. North can ruff, but all I have to lose is two clubs and one trump trick. Unfortunately South follows to the ten of diamonds and now it looks like one down. North ruffs and greedily tries to cash the Ace of spades. I ruff and draw last trump and lose two clubs… But, wait a minute, not so fast. I just give a trick to North´s Jack of trumps and she has nothing but spades in her hand anymore. I lose one extra trump trick but get two diamond tricks in exchange! +790 and plus 11 IMPs when at the other table our teammates went two down undoubled in five spades. Of course my opponent should have returned safely a heart after the club ruff, and we would lose 9 IMPs on the board.