After four playing days 26 masterpoints is not too much! On Sunday we start again a two-day KO teams, that unfortunately ends already on the second round losing both matches in a three-way match. The first round was a three-way as well, we were still doing well, winning both matches. In this slam we gained 11 IMPs. 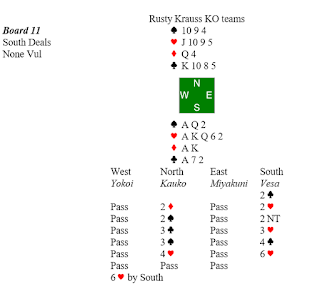 Two hearts was either natural or 25+ BAL. Two spades was a relay and 2NT showed 25+ BAL. Three clubs was Puppet Stayman and three hearts promised five cards. Three spades was a good raise in hearts, but after cuebid of four clubs, four hearts tried to tell that the raise was not that good after all. That was too late anyway, Vesa finished the bidding with a practical bid of six hearts.

West led a low heart and the prospects didn´t look well. With the diamonds 2-2 and the Queen as a wasted value some luck would be needed to make this ambitious contract. Vesa played a second round of trumps both opponents following. Now, if the King of spades is onside and the dummy´s fourth club could be established, then all would be well. And the Ten of clubs could be established, if the suit is divided 3-3 or if East has an honour doubleton. If West has the Queen third in clubs, he could be thrown in, if he is careless enough not to unblock that card. Anyway, our Japanese opponents should be strong enough to foresee this danger, but it costs nothing to try it. But of course diamonds shouldn´t be cashed first in order to make it bit more difficult for the defence. This time there was no difference, as West was holding KJ63, 43, T852, QJ4. After two rounds of clubs and two rounds of diamonds West was thrown in with a club and declarer got rid of his two spade losers.
11 IMPs for the good guys, because our opponents stopped at four level at the other table. From the three-way match the Japanese qualified for the second round with us. But on the next round we were knocked out, while the Japanese team went all the way thru and won this bracket. This was the whole hand: 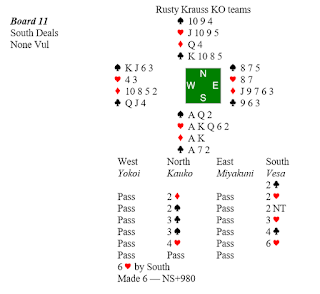 The next day is starting badly, again. An average team knocks us out on the very first round. On the second round losers play against each other only with some small masterpoints on stake. The first board is boring one but the second is not! South´s double of two clubs was more than questionable. Vesa´s pass denied majors but promised a club stopper. Without the stopper the right bid would have been two diamonds. I had a very easy redouble and when everybody passed, I ended up playing my Stayman with high stakes. South found the best lead of the Jack of hearts, I tried the Queen, but North was winning with the King. The Ace of hearts won the second trick, the Queen of spades the third and next the Jack of spades was ruffed by South. I ruffed the heart continuation, crossed the dummy with the Ace of trumps and took one more spade finesse. All that the defence could score was three trump tricks and the King of hearts, EW+1160. After the board our opponents were discussing how good was the double of two clubs and who should have escaped from this disaster. Anyway, the level of the play of our opponents was well below their normal standard and after 12 boards the only question remaining was how big is IMP-difference to us. The match ended with 35-7 to us. There was only one board our opponents scored something. It was number 32, at the other table our opponents found 6NT, 1440. When we managed to get only 1160, that meant seven IMPs out!
If South would have passed at our table, Vesa would have denied majors with two diamonds, I would have bid three clubs (at least four cards and FG+), Vesa three diamonds (five cards) and then three spades from me, showing at least some slam interest. With soft values Vesa would have signed off with three no-trumps and I guess I wouldn´t have continued.

In the evening we play again one session Swiss teams, winning three matches, but losing one ending up at 5th place out of 29 teams. Results: http://live.acbl.org/event/NABC181/12T3/1/summary
Nothing to be too proud of. Maybe tomorrow...
klo maaliskuuta 13, 2018