It´s already a tradition for us, that there´s no reason to be proud of the results of the first playing day. We start with a KO team tournament, meeting Hansa´s team and losing clearly. In the evening we continue with a one-session Swiss. We start well, first blitzing a local team and next winning comfortably Sonsini's team. On the third round we meet Gary Cohler and Paul Lewis. Unluckily it´s not a BAM tournament, because we win three boards and lose only one. But the IMPs are 3-20 and we can say goodbye of winning the tournament. In the last match we play against Garozzo, losing this as well and ending slightly above average.
On Saturday we played compact KO teams, which means that there´s only four players in each team. So Justine was playing all day long and Sadik could concentrate on kibitzing us. From the first round against the team of Connie Goldberg following interesting board appeared: 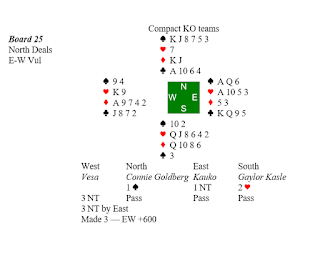 Kasle led the six of hearts (4th best) and I was facing already my first problem. If Connie has a singleton honour, I should play the king from the dummy and then later establish my ninth trick from hearts. But if South has only one honour in hearts, he´ll probably lead his partner´s suit. So I played the nine from the dummy and was pleased to see it score. I continued club to the King and to the Jack and now the question was could I make an overtrick. Connie won with the Ace of clubs and returned a spade to South´s ten. I won the spade continuation, crossed to the King of hearts and finessed the clubs. Now it was time to duck a diamond to Connie´s hand. If she would return now a black card, South would be squeezed in the red suits for one overtrick. Connie anticipated this development and returned the King of diamonds to break down the entry for the squeeze.
At the other table the contract was the same, but Justine decided to lead the Queen of hearts. The rising Swedish star Simon Hult took the lead with the King and played a club to the King and to the Jack. Now Melih found the imaginative switch of the Jack of diamonds! Declarer ducked but took the diamond continuation with the Ace. Now the declarer was in trouble and whatever he did, there was no way anymore to make nine tricks.
On the second round we meet a strong team again, a squad sponsored by Richard Schwartz. And again we are winning comfortably, reaching the semifinals. In the semifinal, the team consisting Steve Robinson and Peter Boyd are slightly better than us so we have to play the match of the third place. A local team has reached surprisingly so far, and we have no difficulties taking the bronze.
You can find the results here: http://live.acbl.org/event/NABC181/103A/2/recap
klo maaliskuuta 11, 2018