In the final day of Keohane Swiss everything is still looking good, lying at second place just behind the leading Dutch team. Six rounds and 42 boards left, now this is not the time to make wrong decisions! On the third round we meet the team captained by Patricia Cayne. I’d like to report some positive boards from our side, but the lack of material hinders me…


Already the first board is disaster for us. All vul Vesa passes and Dano de Falco opens one spade on my right. I have 6, A J 8 5 3, 7, K J 10 7 5 3. A proper distribution for Michaels Cue, but partner is a passed hand and two spades leads us to three level. I don’t want to see partner playing three hearts doubled for minus 1100, so I settle for more peaceful two clubs, lead directing, if Patricia Cayne would end up playing three no trumps. How wrong I was! Patricia passes and when the tray comes back to our side of the table, I notice that Vesa was bidding three no trumps. Why on earth I didn’t bid two spades?! Well, it’s too late to regret that. I can’t imagine any hand from partner that he can make nine tricks in no trumps. He might have three cards in hearts, though, so the game in hearts might be our best spot. The problem with bidding four hearts is that it should promise surely much better hand than I have. Four clubs might be the best bid, it must be a negative move, not believing in nine tricks facing a passed partner. But I don’t want to end up in four clubs if we have a 5-3 fit in hearts so I decide to bid four hearts anyway. Too bad, partner is not passing, but bidding four spades! That is of course slam inviting with clubs as trumps and I try to slow down with five clubs, in vain, because the tray comes back with six clubs. Hoping for a small miracle, if partner has two Aces, four clubs and singleton heart, I might still survive. Patricia leads the Ace of diamonds and I see that I don’t have any chance.

I completely agree with Vesa’s six clubs. If I would have slightly better cards, the Queen of hearts instead of the Jack, the small slam is a good try. Our Dutch opponents stopped in five clubs at the other table so we start the match by losing 12 IMPs.
Couple of bad boards later: 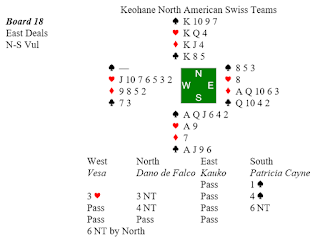 De Falcos three no-trumps is a very good bid. In a spade contract there is very often a heart ruff for the defence to take. Cayne´s four spade bid looks very conservative to my mind. Maybe slam invitation with four hearts is the best bid. Four no-trumps was not Ace asking, but a general positive move and Patricia was more than happy to accept this invitation. I led my heart, but after six rounds of spades and three rounds of hearts I had to surrender. I had to keep three clubs so I had to discard the Queen of diamonds. De Falco continued the King of diamonds, so no club finesse was needed. Adam and Melih stayed in four spades, so we lost again 12 IMPs. We lost this terrible match with IMPs 40-0, which meant zero victory points for us. After this match we were able to say goodbye for any chance of winning this tournament.
klo joulukuuta 04, 2017