On the second day of Keohane Swiss Teams, round seven, we meet the team captained by Hemant Lall. Take West’s seat. 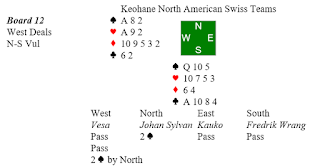 Sylvan’s opening of two spades promises 10-13 points with six card spade suit. East leads with the Ace of diamonds and you show an odd number with the ten. East switches to the six of hearts (3rd/5th), you take the Ace and declarer drops the Queen. What next?
One day later, again round seven, this time take East´s chair. 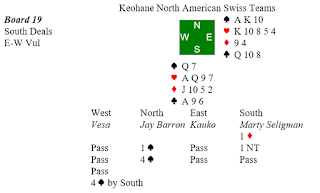 I hope that you didn´t even consider overcalling two hearts? Your opening lead of the eight of clubs looks like a good choice, declarer cashing the Ace and partner encouraging with the deuce. Next declarer cashes the Ace of hearts discarding the seven of clubs from his hand. After ruffing a heart to his hand declarer continues with the two of spades. What is your plan?
In the first board Vesa can see four obvious defensive tricks, two diamonds and the major Aces. The bidding tells that East probably has one trick in either black suit. To beat the contract defenders needs a club ruff as well. Vesa found the club switch at trick three. 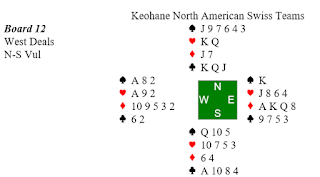 Sylvan won and started the trumps, I played back a second club, Vesa won the spade continuation, returned a diamond and got the club ruff with his last trump. Note that the club switch is correct also if East has club KQxx or KJxx without the King of spades. At the other table North opened one spade, East had an easy take-out double, West was competing with three diamonds and final contract was three spades. One down and no swing. After the opening of two spades I didn´t dare to double facing a passed partner, even at favourable vulnerability.
Against Jay´s spade game all I can see two spade tricks. If declarer has 7-0-3-3 or 6-0-4-3 we can score one club trick as well. But that’s not enough. Best hope beating the contract is that partner has the Ace of diamonds. You can´t afford to try for a club trick, because if declarer ruffs you can say goodbye for the diamond ruff. The diamond switch looks dangerous indeed, if partner has the Queen or the King, we help declarer finessing that card. But if you can trust the declarer, there’s no diamond finesse. Declarer would surely have taken the finesse while the lead was still in dummy. So the diamond nine is the right switch. But what if partner takes the Ace immediately and tries to give us ruff, hoping that the nine of diamonds is singleton? Relax, partner knows that your switch is from doubleton. With singleton diamond East would not start with a risky club, but try for a ruff with a diamond lead. The whole hand: 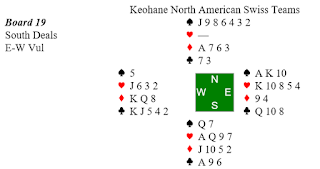 This time it didn´t matter how you defended. Defence scores always two trumps and two diamonds. Even if declarer would have A9xx, the contract goes down with a diamond ruff. At the other table Melih was bidding a conservative two spades instead of four and we gain five well deserved IMPs.