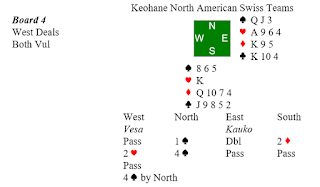 From the fifth round of the last day of Keohane Swiss Teams.  Sitting East, would you make a take-out double after North´s opening bid of one spade. Facing a passed partner, a close decision to my mind. South´s two diamond showed raise with 7-9 points.
What would you lead from my cards? Anything could be right, but I chose "clever" Jack of spades, and was very happy with my choice when seeing the dummy. Declarer wins the first trick with the Ace, partner playing the four, and plays a heart which you take with the Ace West following with the seven. What next? Your carding is upside down, both count and attitude.
A minor suit switch might cost a trick if declarer has the Ace in this suit. A low spade would work out well, if partner has the ten, but this switch is of course too risky. Partner´s heart spot is surely a suit preference signal, but the seven looks like a neutral card denying a minor suit Ace, so I decide to play a low heart to the third trick. Declarer ruffs in dummy, partner following with the three, and plays a low club to the six and the Queen. Your turn.
Looks like partner has five hearts, so it should be safe to continue with a heart after the King of clubs. But before playing anything, let´s think what is the club position. You don't see the Ace, the seven and the three. Declarer has surely the Ace, but is it possible that he has AQ-doubleton? No, with 763 partner plays the seven and not the six. So it looks strongly that declarer has AQ3 and partner 76-doubleton. So the correct move is to duck the club. Declarer continues with a heart ruff, spade to his King and endplays me with a trumps. Next I just cash the King of clubs and exit with my last heart. My King of diamonds is the setting trick. Declarer´s hand: AK972, J82, A6, AQ3. We win six IMPs, when our teammates settles for a partscore.