What could be a better place to update our blog, after the sunset sitting on my 18th floor balcony and sipping Californian Pinot Grigio, outside temperature being well over 20 degrees. Our results were not too good this time, earning only 70 masterpoints. In the first two-day knock-out teams we lost the very first match against the team captained by Jim Mahaffey. After the following deal things were looking quite bright, still. 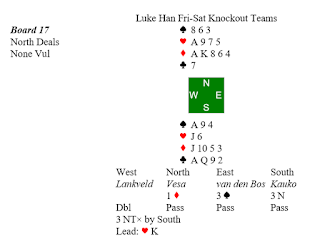 I wasn’t too happy to bid 3NT with my modest values, but what else? After the double I was considering escaping to four diamonds, because Joris van Lankveld was maybe doubling with a running heart suit. After the lead of the King of hearts I thought I made a big mistake not to escape, but to my big relief Vesa was tabling down a very suitable dummy. Specially the nine of hearts gave me good hopes to make my doubled contract. I ducked the lead and West continued with the Queen of hearts, which I ducked as well. If East has been disciplined with his pre-empt, West must have spade void and all the outstanding defensive strength, including four cards in diamonds. Therefore, I can’t take any high diamond from dummy, but run the Jack of diamonds from my hand at first opportunity. But how to cross to my hand? Not with a spade, because if East has anyway the Queen of diamonds, I’ll go down a lot. West is thinking a long time before making the switch to the third trick and I’m hoping to see a club to have an easy entry to my hand for the diamond finesse, but he surprises me with the King of spades. So, East was not so disciplined with his overcall! I’m letting West to win the third trick as well and next he’s continuing with a low diamond. I play low from dummy, East follows with the nine and I win the trick with the Jack. The rest is easy. I know that Lankveld must have the King of clubs for his double, so when I’m running my diamonds I just have to follow if he is discarding any heart from his hand. He is, and after the major suit Aces I’m endplaying him with a heart and he has to give me the two last tricks with AQ of clubs. Nine IMPs for our side when our opponents are staying in a diamond partscore at the other table. 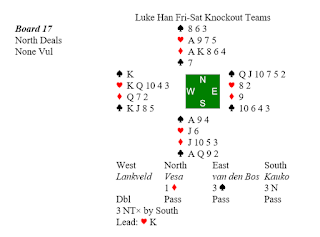 One of the main events was the three-day Keohane North American Swiss in the last weekend. We just survive the qualification for the second day, but the last match against a Chinese team on Saturday is a nightmare, so we are kicked out from the final. How would you play the following no trump game? 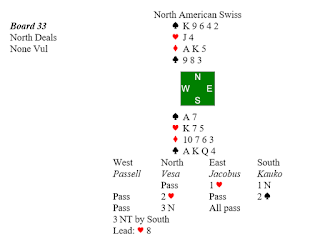 Mike Passell starts with the eight of hearts and Marc Jacobus plays the Queen. It’s surely correct move to duck the first trick and Jacobus continues with the Ace and a third round Passell discarding a club. What next?
The club discard is not from a four card suit. Either West has a five card club suit or 4-2-4-3 distribution. If Jacobus has 2-6-4-1, all I have to do is to establish my spade suit. But without cashing my top clubs too early. But if East has 3-6-3-1, I have to cash my top clubs first to force some discards from him. If he has QJx in diamonds, I’m making the contract. He has to keep his diamonds, so whatever his discards are in the major suits, I’ll follow with three rounds of spades and claim nine tricks. The whole hand: 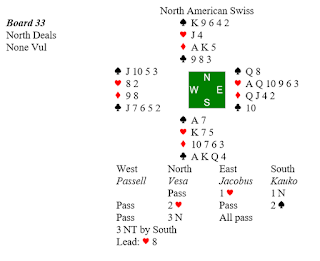 I cashed my top clubs and the contract was impossible to make after that. I did have all the sevens in other suits, but why not in clubs! Otherwise I still could survive unblocking dummy’s high clubs and endplaying West with a spade. After the board Melih was teaching me that of course I should play the spades without touching the clubs. The club discard was of course from five card suit. Melih was right in this aspect, that if West has only three clubs, he has surely four cards in spades and it’s safe to continue with three rounds of spades. With 3-2-5-3 his first discard is surely a diamond. But there’s no point of arguing with a player who knows everything about everything, especially when he sees all the four hands!
Melih is not the best partner or teammate, but he is a very good player, as the following board witnesses. 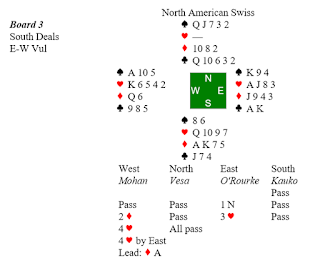 I started with the two top diamonds and then shifted to a low club. O’Rourke, the sponsor of a strong team, won the club continuation in her hand, proceeded with a heart to dummy’s King and had to lose two more heart tricks in the end for one down. Melih got the same start, but after the bad news in the fourth trick he realised that in order to make his contract he needed to find South with 2-4-4-3 distribution. So, diamond ruff, club to the King, another diamond ruff, club ruff and then three rounds of spades. South had to ruff his partner’s high spade and play a trump to declarer’s  AJ-tenace.
Finally one more board to prove, that it’s so easy to blame your partner or teammates after seeing all the four hands in the end. I had QJ AKJ J95 AK875, all vul I open one club as a dealer. Partner responds one spade and I jump to two no-trumps showing 18-19 balanced hand. Partner bids three diamonds to show at least a mild slam interest with 5-4 distribution. Without any problem yet, I’m bidding three no-trumps, but partner is continuing with four diamonds. What next?


Pointwise I have maximum and my spade quacks are working very well for sure, but then again, I have only four points in partner’s suits and surely some wastage in hearts and clubs, so I decide to bid negative four no trumps which is ending the auction. 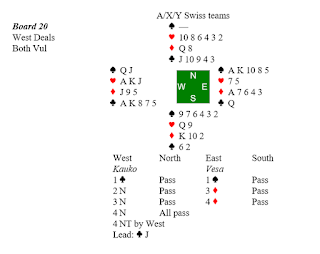 Wrong decision! I was very right not to think about a diamond slam, but six no-trumps was a very good contract. Most often North is not leading a diamond, so I can first test the clubs, and if that suit is not breaking 4-3, the heart finesse must work. On the way to our last dinner Melih was blaming me for the lost opportunity. Of course I should have upgraded my spade holding and bid five no-trump for a pick a slam. My modest proposals, that partner might have AK10xx Qx Axxxx x, in which case eleven tricks in any contract would be maximum, were not accepted. Should Vesa continue with five no trumps over my four no trumps? A close decision. All he knows from my hand is 18-19 with either 2-3-3-5 or 2-4-3-4 distribution without too many honours in his suits. The Queen of clubs is of course very valuable, but if I have something like Qx AKJx Jxx AKxx, six no trumps is well below 50% contract. And if QJ AKQJ Jxx Axxx our Mr Besserwisser would have blamed us not to find the only slam that makes, six hearts (if opponent’s hearts break 4-3)!
klo joulukuuta 06, 2018