An interesting board from the first round of the swiss teams 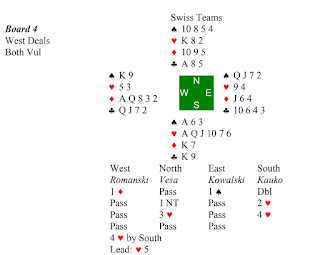 Jacek Romanski led a trump and seeing dummy I (Kauko) noticed that we should have ended in
three no-trumps played from my side of the table. Even played by North, three no-trumps makes
if diamonds are 4-4 or, like in actual deal, East has ♦ Jxx/♦ Qxx. The diamond suit is blocked
and defenders can t cash five tricks in the suit.

Anyway, now it s too late regretting the bidding. Playing 4 ♥, I have four obvious losers, two
spades and two diamonds. If opponent s trumps are divided 3-1, my only real chance is to find
East with ♦ Jx/♦ Qx. I start with the ♥ Ace and King. If either defender is not following to the
second round, I continue with with ♦ 10. If East has an honour doubleton, the defense can t
prevent me to establish one diamond trick for a spade discard. This time both defenders follow to
the second round of trumps and now I have some throw-in possibilities as well.

It looks like a good idea to continue with a small spade from the dummy. East plays low and I let
West win this trick with the ♠ 9. After some thought Romanski continues with the ♠ K, which I
win with the Ace. Next I cash the ♣ K followed by ♣ 9 to the Ace. Too bad for me, West is
awake and plays a high club the second round. I continue with the ♣ 8 from the dummy and to
my relief Apolinary Kowalski has already the ♣ 6 in his hand. Then I just discard my last spade
and West would be endplayed. In the last second Apolinary puts the small club back to his hand
and takes a closer look. Of course he plays the ♣ 10 and I don t have any chance anymore. I
discard my spade hoping that West started with QJ third. No luck, East stays on lead and after
diamond switch I m one down.

Our teammate Melih Ozdil proposed that best line would be to start with six rounds of hearts. It
is true, that it s not easy to defend after this start, but correct discarding keeps declarer always to
nine tricks. And if East happens to have AQJxx(x) in diamonds, even an average level defense
can t go wrong if I cash all my hearts. East keeps only one diamond and three cards in both black
suits.