Knocked out in the round of 32

Our opponent's for the round of 32 were a team captained by Hemant Lall, playing with Reese Milner, Sabine Auken, Roy Welland, Zia Mahmood and David Gold. Facing a top class opponent means that you should be playing your best game and also have your share of luck to be able to advance for the next round. With 60 boards to be played in the match we were expecting to have a lot of interesting boards.

The following board from the 3rd segment proved to be too difficult for us. You be the judge how it should have been bid... The bidding has gone as shown in below.

You can see the explanations of the bids by clicking the bids on the bridge movie above. So far the bidding has been basically forced with the agreements we have.

Now it is a decision time. Should you stay or should you go?

The whole deal is shown below:

If you managed to reach 7 diamonds, I congratulate you. It is not easy to bid as the key card is the queen of clubs. With our agreements, we did not have an easy solution to find out the queen.

Zia Mahmood and David Gold reached it, well done by them. How were they able to do it?

They used a convention called a 6 Ace Roman Key Card blackwood. After a similar beginning to the auction, the strong hand was able to find out the club queen and both minor suit kings. That was all that was needed to reach the grand slam. 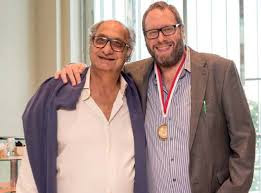 Above pictured Zia and David. Picture by Francesca Canali.