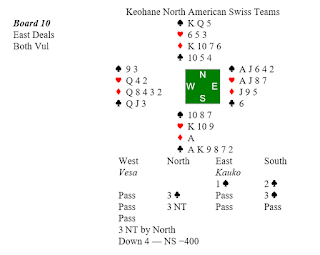 It´s the day two in the Keohane Swiss Teams. In the fourth round we meet a team of average standard. At the other table Adam overcalled two clubs after one spade opening. After two passes East didn´t reopen with a double, a strange decision, so Adam was left playing peacefully the club partscore, making one overtrick for +110.
At our table North raised aggressively to three clubs, South asked for spade stopper and North became declarer in three no-trumps. If I lead a low spade, declarer should play the ten from dummy. When it holds, he unblocks the Ace of diamonds and ducks a club. He takes the diamond continuation with the King and plays a heart towards the King and makes nine tricks. Luckily for us I chose to lead a small heart. Now if declarer puts up the King and concedes a club, he makes eight tricks for one down. However, he decided to play the nine, Vesa won with the Queen and played back a spade and I let the declarer to win the trick with the King. He played next three rounds of clubs (I discarded a heart and a diamond), Vesa continued spades and I could cash four tricks in that suit. What declarer should discard from the dummy? It didn´t really matter. If he discards one club and the Ace of diamonds, I continue with the Jack of diamonds and the defense will score one diamond trick. Actually declarer chose to discard two clubs from the dummy, but now I could endplay the dummy with a diamond and wait for two more heart tricks to come. Four down, 11 IMPs for the good guys and winning the match by 19 IMPs.
klo joulukuuta 03, 2017